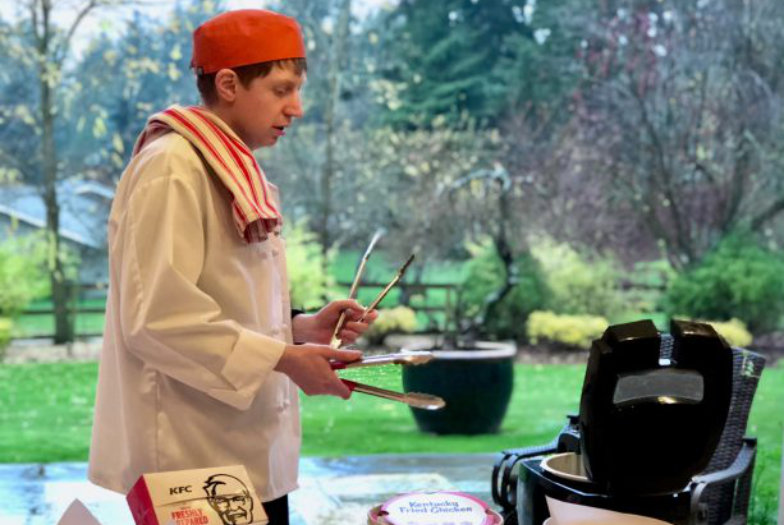 My son’s superpower is his ability to become an expert on any subject he takes a special interest in. After performing his first cooking demonstration in the first grade, he dreamed of becoming a chef. Now 25 years old, Andrew — a young man with autism — works part-time as a prep chef in a commercial catering kitchen. During his free time, he researches his favorite foods, hunting through cookbooks, magazines, cooking shows, and the internet for recipes. His current fascination with Colonel Sanders and Kentucky Fried Chicken has led him to collect all things having to do with their crispy, crunchy, flavorful crust.

“It says here that the Colonel used 11 herbs and spices,” he once told me. His eyes were glued to a website claiming to know the secret to their mouthwatering chicken.

Soon after, bottles of herbs, spices, and flavorings began lining his bookshelves like tiny glass soldiers. Empty fried chicken buckets collected from KFC towered over his nightstand, while the Colonel’s face smiled down at him. A tabletop deep fryer now sits on a shelf in his closet, and a chef’s jacket and hat hang close by.

“You know Mom, the actual recipe is locked away in a vault,” he said, “but I’m going to crack the code.”

Andrew’s single-mindedness is another one of his superpowers, but that day I grimaced, knowing what was to come. Months of research, volumes of printouts, dozens of handwritten recipes, and multiple brochures for commercial deep fryers later, Andrew discovered what was sure to be the secret recipe.

“Look!” Andrew pointed to an old movie of the Colonel he found on YouTube. “I’ve finally discovered the secret.”

I squinted at the grainy black-and-white video, trying to understand what he saw. All I could see was a man with white hair and a bowtie wrestling with what looked like a pressure cooker over a hot stove. The elusive 11 herbs and spices were nowhere in sight. Although I had no idea what Andrew had seen, past discoveries of this sort made me certain that we would be eating fried chicken soon.

A week later, our family sat on the back patio while Andrew demonstrated how to make what he called: Killer Fried Chicken (KFC).

“Why is it so special?” his sister asked.

“Because it makes me happy inside,” Andrew said, patting his mini deep fryer.

It was true. My son has always been happy in the kitchen. I watched as he carefully mixed his own unique blend of 11 herbs and spices, his passion evident in the way he handled each ingredient and prepared each piece of chicken. When the demonstration was over, he offered me a piece of his fried chicken. And when I took the first juicy bite, I agreed that it was finger-lickin’ good.

Kristin Jarvis Adams is the author of the award-winning book The Chicken Who Saved Us: The Remarkable Story of Andrew and Frightful. You can find her at: kristinjarvisadams.com, or on Facebook. This article first appeared in The Autism Blog at Seattle Children's Hospital, December 2018.