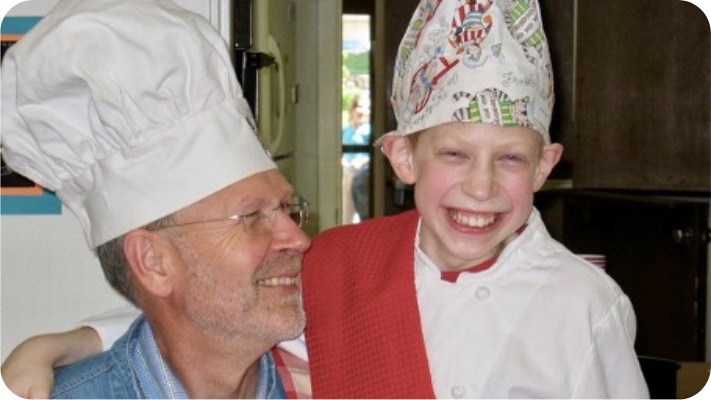 At my first parent-teacher conference of my son’s third-grade year, the special education teacher shuffled papers around her desk for thirty seconds too long. Nervous sweat pricked at my skin, and I feared more problems.

“I think we should find something to highlight Andrew’s skills in front of his peers,” she said.

Surprise and relief melted my anxiety, but my next thought was: What skills? Andrew’s Individual Education Plan (IEP) was so thick that it had to be stapled into three separate segments, and the label autism still made me queasy each time I encountered it next to his name.

“I notice he spends a lot of time in the play kitchen. I watch him sort pots and pans and see how he uses all the tools. He really enjoys it.”

“His grandfather is a chef,” I said, not convinced that my son had developed the talent by osmosis.

“Not really,” I answered, but then remembered he spent his entire babyhood unloading my kitchen drawers and playing with our mixer. He made mud pies in our backyard and cut them into shapes with my cookie cutters. He measured flour and rice with my cups and ground coffee beans for his grandpa. Maybe he wanted to be a chef?

After school, I asked Andrew if he liked to cook.

“BAM!” he said, then plopped down in front of the TV.

I had no idea what he was trying to say. He often answered my questions with words that felt like riddles I had to decode.

When I left in search of dirty laundry, I heard it again: “BAM!”

Emeril Lagasse from the Food Network was demonstrating his prowess in the kitchen. Each time he prepared to drop a new spice into his soup, he said, “Let’s kick it up a notch,” followed by “BAM! “

My son was in love.

“I think Andrew wants to be a chef,” I told his teacher the following day.

Several weeks later, I sat on the cafeteria floor with Andrew’s classmates while he and his grandfather began their first cooking demonstrations. Most of his peers were soccer players, ballerinas, or budding musicians. One girl even competed as an equestrian. My son was the kid who spoke few words and spent his free time stacking pots, pans, bowls, and cups into impossible towers. But that day, things changed.

“Today, I am making the world’s best chocolate chip cookies!” said Andrew. He dropped the butter, sugar, and vanilla into the mixing bowl. One student named Erik hovered over the bowl, watching the whirring blade.

Andrew’s grandpa showed the class a bowl of dry ingredients the two had prepared. But before Andrew dumped it in, he held up a box of cocoa powder.

“This is my secret ingredient,” he said. “It will kick it up a notch.”

I watched, mesmerized, as my son thrust his fingers into the box and dropped a heap of chocolate powder into the batter. “BAM!”

Soon the smell of hot cookies filled the cafeteria and wound its way down the hall. Teachers and students appeared from other classrooms to watch my son, and his sous-chef grandfather put on a show that rivaled anything Emeril could do. When every last cookie was devoured, Erik tapped me on the shoulder.

I smiled and thanked him, thinking that maybe Andrew’s special education teacher was right; my son did have something special to share with his peers. Instead of focusing on everything he was not, she had found a way to highlight everything he was—and it was clear he had a knack for cooking.

After graduating from high school, with the help of a job coach, Andrew landed his dream job of working in a commercial kitchen. Late one afternoon, Erik spotted him in town.

Andrew stared at his shoes, unsure what to say.

“To this day, your chocolate chip cookies are the best I’ve ever tasted! How did you make them so special?” he asked.

I watched as a slow grin spread across my son’s face. “You just have to kick it up a notch.”

Photo of Andrew and his grandfather courtesy of Kristin Jarvis Adams.